Nice post by Jared Bernstein a few days ago on reforming the corporate tax code:


In that sense, the White House’s proposal creates an interesting political challenge.  For years now, American corporations and their reps here in DC have been calling for a lower rate while at the same time availing themselves of billions in tax breaks that have kept them from paying the statutory rate.   In my debates with supply-siders, they’re all about the rate…they’re happy to trade more base for points off of the rate.  In the next chapter of this debate, we’ll get to see how much they meant it.

It would be great to see such a compromise work with the conservatives, but I highly doubt it.  There's always a caveat with them; if you shave points off the tax rate, they will still look (and fight) for loopholes in the tax code.  Give a Republican a tax cut and he'll ask for more..
Posted by ekanomist at 2:19 PM No comments:

This relates back to the iPhone story I posted last week; Stiglitz warned us about the dangers of outsourcing years before the current US unemployment crisis:


But even if the eventual numbers are limited, there can be dramatic effects on workers and the distribution of income. Growth will be enhanced, but workers may be worse off - and not just those who lose their jobs. This has, indeed, already happened in some developed countries: in the ten years that have passed since the signing of the North American Free Trade Agreement, average real wages in the US have actually declined.

Economics, especially economic policy, never ceases to amaze me.  The people that were right before the financial crisis continue to be right.  The only problem is, they're not the ones making the policy decisions.  For every Larry Summers or Tim Geithner, there is a Paul Krugman or a Joseph Stiglitz sitting on the sidelines getting these things right.  Why aren't they the ones advising the president?
Posted by ekanomist at 8:28 PM No comments:

American corporations send jobs abroad to create a cheaper product (because they care about the consumer?). Apple, for example, employs labor in China at around $17 a day to build our iPhones, iPads, and Macbooks. Their factory employees work 12 hour days, 6 days a week, and live on the premises, making it easy to have them work any time of day (what corporate executives like to call "labor flexibility"). The result – an iPhone that sells in the US for $199. Because this price is relatively cheap, Americans won’t complain about the exploitative labor practices used in producing it – we seem to believe that products would surely be more expensive had they been produced in the US. But, would they really? Let’s compare the labor costs of making an iPhone in China vs. the US: 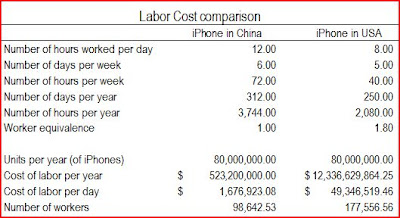 Here is the most important figure in this chart: 177,557 – the number of jobs that could’ve been added to the US labor force just for building the iPhone domestically. Not a small number, but again – how would this affect the final price of the product? Using the labor costs above, here is the total cost breakdown (per iPhone): 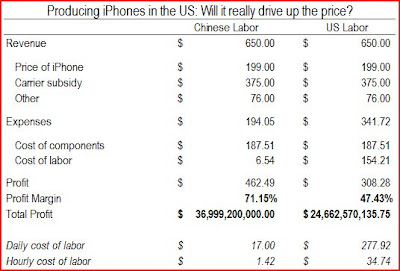 Based on these calculations, US labor would increase the cost of producing each iPhone by about $150. The question is – does this drive up the price consumers pay for the phone? The simple answer – it doesn't have to, and here’s why:

So, if Apple can produce iPhones in the US, create thousands of jobs in our labor market, make the consumer happy by charging $199 per phone, and still make a profit of close to 25 billion – why don’t they?

Footnote:
I used various sites that calculated the cost of iPhone components, daily wages of Chinese workers at the Foxconn plants (an electrical manufacturing company used by Apple for production), etc. Links to all the source data are below. Bureau of Labor Statistics calculates hourly compensation of US workers, which comes to about $34.74 (with $23 of it coming in hourly wages and the rest in benefits and employer social security contributions). The units per year calculation comes from Apple's most recent (2011 Q3) earnings report (I use 20 million units over 4 quarters which is a reasonable estimate).

Posted by ekanomist at 8:51 AM No comments:

I read this hilarious story today.  What isn't hilarious is the idea of bankers speculating with global food prices.  Take a look at this chart:

There is clearly a spike in food prices before the financial crisis, and another peak in 2010. Financial institutions (in the form of index funds) control about 25-35% of agricultural futures contracts:

We estimate that Barclays makes up to £340 million a year from betting, or speculating, on food prices. In the last five years, the amount of financial speculation on food has nearly doubled, from $65 billion to $126 billion.


I guess you can bet on anything, even if it means taking food from the poor...
Posted by ekanomist at 8:30 AM No comments:

Today's post is more about my thoughts than any data or deep analysis. I've been thinking about the financial sector over the past few days and what purpose it serves. There is one very obvious purpose: to lend. Lending may help consumers buy goods (i.e. cars), homes, and pay for education. Lending also provides capital to small businesses. People can also open accounts and store their money, in return receiving interest payments. All of these are great, and very necessary for a well-functioning economy.

Now for the bad: the financial sector has become very large, and in the process moved away from only collecting deposits and lending. The US financial sector currently makes up around 8% of GDP. There might not be an "ideal" size for any sector but wouldn't it make more sense to put our resources into something more productive? Financial innovation is not real innovation. Paul Volker, former Fed chairman, said it best when he said the last great financial innovation was the ATM. What is financial innovation? Financial innovation is creating derivative products, such as MBS (mortgage backed securities) that helped bring down the US housing market. Is it necessary to create an "Option" so that you can bet on a stock going up or down (does the stock really need another "stock" to bet on itself?). Is it necessary to have a credit default swap market where you can buy insurance for a risky asset? I always thought that a return on a financial product should justify the inherent risk. If you're willing to wager on a risky asset, you take the gain or the loss that comes to you; there shouldn't be another product to guard against the downside.

We shouldn't reward the financial sector for coming up with these useless innovations. Making money out of money is not something a child should grow up wanting to do. Engineers and mathematicians move to the field of finance, it pays more, so high skilled labor will always flow there. In order to keep America innovating and ahead of the rest of the world, we need to stop glorifying the financial industry. Go back to doing your real job, lending and holding our deposits.

Posted by ekanomist at 11:45 AM No comments:

This is an Economist article that is likely to get a few people riled up:

That is relatively uncontroversial. But their other finding is likely to raise a few eyebrows. They reckon that if the tax system were reformed to make evasion impossible, the top tax rate might be able to rise to as much as 83%—that is, to levels last seen in the 1960s—without hurting the economy. This is because people do not seem greatly to adjust how much they work when tax rates change. Higher top rates may also discourage big earners from spending too much of their time trying to bargain for a larger share of the overall pie.

Yes, it's time to reform the US tax code.
Posted by ekanomist at 6:26 AM No comments:

If you've been reading the news over the past few months, you may be convinced that the problem in Europe is that certain countries spend too much. Specifically, countries like Portugal, Ireland, Italy, Spain, and especially Greece have governments that are wasteful and spend a lot more than they bring in. There is also a political component to this idea, the stronger countries in Europe (Germany) believe that these other governments should learn to be more fiscally responsible. This uncertainty has led to large increases in the cost of borrowing for these countries (costs that are most likely impossible for these countries to meet).

So is this all true? Do these countries spend too much and is that how they got into this mess? The simple answer: NO!

For those who don't remember (or would like to forget), we experienced a global financial crisis in 2008. When there is a recession, growth slows and as a result government revenue dips. Even if expenditure remains unchanged, there will almost definitely be a deterioration in a country's debt levels. Now some countries were hit harder than others (China, for example, experienced a minimal slow down). The European countries seemed to recover from the crisis weakly and as a result financial markets overreacted by driving interest rates on sovereign bonds higher and higher.

The real question in all of this is not how to get these countries to cut spending, it is how we can help them recover and prosper. Increasing demand is the solution. Increase demand and the rest of the problem will take care of itself. What is increasing demand and how can it be done?

In order to make itself relevant again, Europe needs to look to the emerging market countries like China, Brazil, and India. This may be difficult pill for the former colonizers in Europe and America, but yes, I am telling you to listen to the countries that you left for dead hundreds of years ago. Many of these countries don't have enormous financial sectors (the US financial sector has gone from 4% of GDP to 8.4% in 2008).

Take a look at bank assets as a percent of GDP for the following countries (a simplified measure, but an interesting one nonetheless): 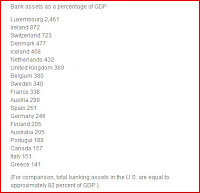 Many of the world's advanced countries need to return to real production. This means spending on research & development and bolstering high technology industries. Until this happens, Europe and the rest of the "developed" world will continue to falter.
Posted by ekanomist at 9:00 AM No comments: